Johanna Marie Sorensen, daughter of Christian Sorensen and Dorthea Petrina Jensen, was born 30 March 1889 in Tolstrup, Hjørring, Denmark.  She married Andrew Daniel Mortensen on 28 September 1921 in Logan, Cache, Utah.  Johanna was the second wife of Andrew Daniel, following the death of his first wife Christina in 1918.  Johanna died 6 April 1975 in Meridian, Ada, Idaho, and is buried in Preston, Franklin, Idaho.

Andrew Daniel and Johanna had 3 children: 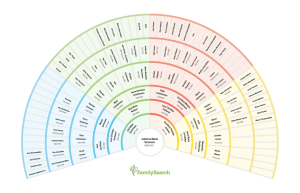 Have Something to Contribute

If you have A.D. Mortensen family history information you are able to share, please add your contributions directly on FamilySearch, or Contact Me to share what you have.

To protect the privacy of living individuals, I intentionally limit the details published about recent generations of the A.D. Mortensen family. Note that some details are published in cases where 1) information is already publicly available, 2) individuals were born before 1940, or 3) in cases where the individual is known to be deceased.